The Chartres labyrinth has many qualities. It allows several variations, among others through the reduction of the number of circuits. So I can derive a 5-circuit labyrinth from the 11-circuit original. By leaving out the first 6 circuits (if I count from the outside inwards). See the following drawing: 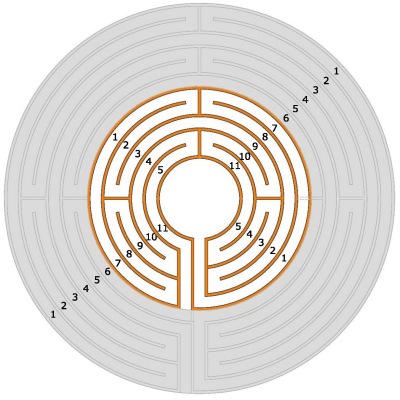 The entire labyrinth with the 5 innermost circuits

By the way, I can also cut out the 6 inner circuits and take only the 5 outermost ones. This works also. See the following drawing:

The entire labyrinth with the 5 outermost circuits

Here the 5-circuit Chartres labyrinth as a whole. Sometimes it is called Inner Chartres, but as we have seen we could name it also Outer Chartres:

Let us look a little more exactly to the path sequence: At first one comes quite near to the middle, namely on circuit 5. Then I go outwards in turn: 4 – 3 – 2 – 1, even if that leads me to different sectors. In some Roman labyrinths this happens in every sector. Finally I reach the centre directly from the outermost circuit. This is a shortened reproduction of the path sequence of the 11-circuit original, however, contains their whole dramaturgy.

There are only a few concrete examples of this type up to now, as for example the one in Nieuwegein in the Netherlands which I could visit this year.

Can I now produce from this Chartres Labyrinth a classical labyrinth with the circuits not interrupted and the four typical turning points by leaving out the barriers in the vertical and horizontal axes? It is possible. Here the result: 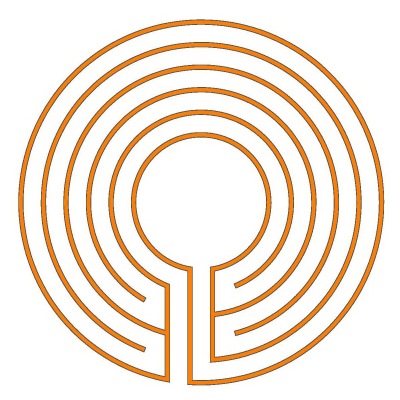 The round 5-circuit classical labyrinth 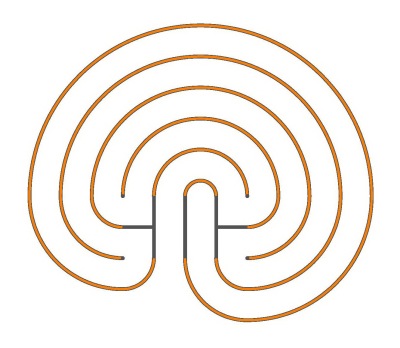 The 5-circuit classical labyrinth with the seed pattern

We see the habitual four points with the central cross. But in the middle we have a line more. The vertical axis is so to speak divided in two lines. So we get the same path sequence as in the Chartres labyrinth.

There are still other path sequences known for the 5-circuit classical labyrinth, as for example the one in Peter’s rockery labyrinth.

Can one now generate from the 5-circuit classical labyrinth with the small middle one with a bigger middle which can be called then Knidos labyrinth? It is possible. Here the drawing: