Up to now we have always considered the patterns of alternating labyrinths. Most of all well-known labyrinths are alternating. In these labyrinths, the pathway does not traverse the (main) axis. Every time when it skips to another circuit it also changes direction (clockwise or anticlockwise). If we transform such labyrinths into the rectangular form, we split the main axis along the central axial wall to which are aligned the turns of the pathway. Both halves are then flipped upwards. By this, the turns of the pathway come to lie on the left and right outer sides of the rectangular form. The pathway, however, is not interrupted. The entrance to the labyrinth and the way to the center lie on the outermost left and right verticals of the rectangular form.

If we want to transform this Ariadne’s Thread into the rectangular form, the axial piece of the pathway has to be split in 2 halves.

Figure 2. Transformed into the Rectangular Form

Fig. 2  from top to bottom shows the process and its result. As can be seen, the axial segment of the pathway is split on its full length (in two dashed lines), and these are flipped upwards on each side. 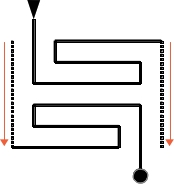 Fig. 3 shows the pattern once again. In the rectangular form, the Ariadne’s Thread cannot be drawn in one single line. Multiple lines, this case two interweaving lines, are needed for this. Beginning at the entrance on top left, the first line ends at the outer right side (dashed line). This is the right half of the pathway segment that traverses the axis and therefore was split. Its course is in direction from top to bottom. The second line begins as the dashed line on the outer left side, which is the corresponding left half of the pathway segment that traverses the axis. This line must be drawn in the same direction (from top to bottom) as the right half. Both halves of the same segment of pathway, of course, follow the same direction. These two halves now mark the outermost vertical lines of the rectangular form. The pathway segments for the entrance to the labyrinth and the access to the center lie further inside.

3 thoughts on “The Pattern in Non-alternating Labyrinths”