This labyrinth exists since 2014. I still have written about a visit of the health garden containing it in my personal Blog (see Further Link below). Today we will look at the labyrinth itself.

Thus is the plan: 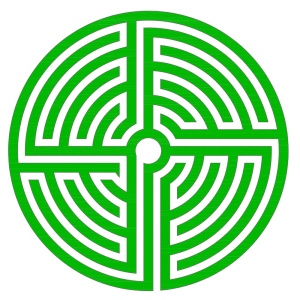 It is a serpentine-type Roman labyrinth with four sectors. The whole diameter amounts to 15 m, the middle has a diameter of 1.40 m. The ways are 40 cm wide and paved with granite stones. They are separated of each other by a 50-cm-wide grass verge. The whole way through the 7 circuits in the 4 sectors to the center amounts to about 182 m. The entrance of the labyrinth lies on the right beside the main axis. The dividing stripes of the single quadrants lie on a cross.

There are two videos on YouTube, here the first one:

And here the second:

In the meantime, I have considered what one could have made better in a “labyrinth-technically” way. Since the idea in itself of a Roman labyrinth in the middle of the health garden seems not to be so good realized.

The last piece of the path arriving the center should always lie on the central main axis. If one makes the middle a little bigger, one receives above all longer and steadier path segments around the middle. If one wants to reach this and maintain the whole diameter of 15 m, one can make the paths and the dividing stripes each 40 cm broad. Then the center would have a diameter of 3.2 m.
One could have built a better Labyrinth at the same place and with the same costs. 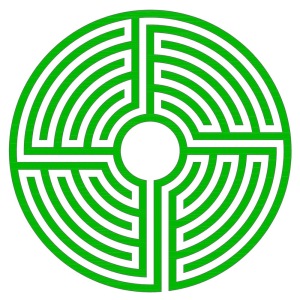