Readers who have been visiting this blog for some time, will know the following figure. 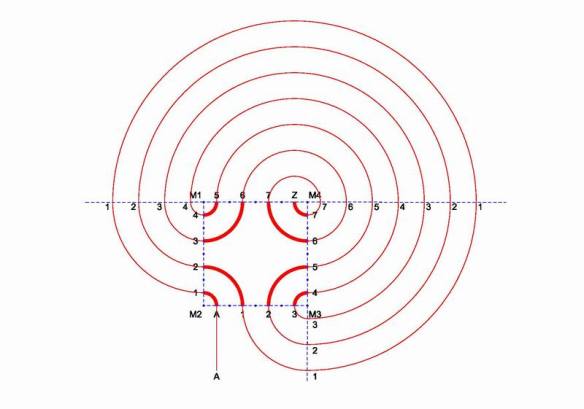 Erwin calls it the Snail Shell Labyrinth. He had generated this labyrinth by completing the seed pattern for the Ariadne’s Thread of the Cretan-type labyrinth. But instead of the usual end he completed it around an other one of its ends. So he did, what I refer to as shifting the center. Somebody else also had the same idea, as can be seen in this source on page 14 (scroll down on the link page). Both shifted the center to a neighbouring end in the same quadrant, but did not continue with this process.

What might be unknown to the most is, that the Snail Shell Labyrinth is the only other figure that can be generated by rotating the seed pattern of the Cretan. With the statements from my previous posts about the shifting of the center (see related posts below), we are able to demonstrate this. 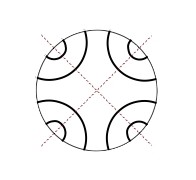 In addition, each of these quadrants is symmetric in itself (fig. 3). This reduces the range of figures to two pairs. Each pair is made up of the same figure rotating either clockwise or anti-clockwise.

Figure 4: The ends and the pairs of figures

Once again I come back to the shifting of the center. This time I want to show the result of rotating the seed pattern of the Näpfchenstein labyrinth.

Ill. 1 shows this labyrinth and its seed pattern for the Ariadne’s Thread.

Rotating this seed pattern results in two figures. In fact this is only one figure, the labyrinth itself, either in clockwise or anti-clockwise rotation. This pair of figures is then repeated five times.

A closer look at the seed pattern shows the reasons. The seed pattern is not only composed of 2 similar halves, but made up of six identic sixth parts. Moreover, each of these sixths is symmetric in itself (Ill. 3). This explains why the two figures differ only in their rotational direction (clock- or anticlockwise).

A seed pattern that is composed of multiple similar elements, after a certain number of rotation steps will look exactly the same as in its original position. The Näpfchenstein seed pattern is very well suited to illustrate this.

After only two rotation steps the seed pattern is self-covering. This, of course, generates the same figure as in the original position.

The number of rotation steps needed for a seed pattern to be self-covering corresponds with the number of figures that can be generated with it. With the seed pattern of my demonstration labyrinth, 12 figures, with the one of Rockcliffe Marsh 6 figures, and with the Näpfchenstein seed pattern, 2 figures were generated. It has to be kept in mind that the same figure in clockwise and anti-clockwise rotation is counted as two figures. In some seed patterns with an inherent symmetry in each element, the number of different figures may be further reduced.

In the first post of this series I have stated, that it is of crucial importance to indicate on the seed pattern where the center of the labyrinth is situated. Generally this is not stated and the seed pattern is oriented in such a way that the entrance is from below and the center lies somewhere on top.

The seed pattern for the Ariadne’s Thread of my demonstration labyrinth is also oriented this way. But what happens, if the center is shifted to an other end?

In our seed pattern there are 12 possibilities to place the center.

Figure 2: The 12 Ends of the Seed Pattern

We could complete a new figure around each of these 12 ends as shown in the first post. This will always result in a figure with an entrance, a center and five circuits. This remains the same and thus can be drawn as one general figure. The only thing that changes is how the circuits are connected to each other. And this is affected by the seed pattern.

Figure 3: The General Figure with Entrance, 5 Circuits and Center

The general figure has a free circular space in place of the axis. The connections for the five circuits as well as the entrance and the centre are distributed in equal distances on the circle. The circle in fact is only an auxiliary line. Into this circular space we then place the seed pattern for the Ariadne’s Thread.

Figure 5: Connecting the Ends 1 – 3 with the Center

We first connect the end 1 with the center. This is the correct center I usually mark with a bullet point. The resulting figure is our demonstration labyrinth. Another figure results, if we place the center at the end 2 of the seed pattern. This figure is made-up of a core-labyrinth of the Knossos-type. To this are added two consecutive circuits outside, without the pathway changing direction from clockwise to anticlockwise. The path thus traverses the axis twice. Connecting the end 3 with the center results in a figure composed of a core-labyrinth of the Tholos type with two additional ciruits outside and one additional circuit inside. Except for the core-labyrinth the path does not change direction and thus traverses the axis three times.

All 12 resulting figures can be viewed here.

With the same seed pattern 12 different figures could be generated. These were labelled as figure 1, 2, etc. till figure 12. The number indicates which end of the seed pattern was connected with the center to generate the figure.

Figures 1 (and its dual, figure 7) and 5 (11) can be considered as true labyrinths, figures 2 (8) and 3 (9) are composed of a core-labyrinth with added circuits on which the path does not change direction. However, these are not spirals in the strict sense as the path does not continually wind itself in but changes stepwise from one circuit to the next whilst traversing the axis. Figures 4 (10) and 6 (12) are combinations of isolated closed forms on certain circuits and a spiral-like or single pathway that only covers the remaining circuits.