Seen with the eyes of a geometer and labyrinth builder (optional: designer or somewhat sophisticated: experimental Labyrinthologist)

Here the classical labyrinth, composed after the well known basic pattern with the cross, four dots and four angles in between. Arranged in a square.

The classical labyrinth with constant paths

From this square the whole labyrinth is developed, connecting all elements  in curved lines together. So it is a synthesis of square and circle. And all 5 centers of this curved lines are located inside the square and their bow-shaped  pieces (semicircles and quarter circles) are connected without sharp bends. So the labyrinth figure with her boundary lines is built.
If one wants a walkable labyrinth with constant path widths, the central source cross withdraws and a rhombus-shaped figure (fontanelle) remains.
If one looks at the layout of the paths, one recognises that the entry axis, the middle axis, the central axis are all lying in different levels. The entry axis does not lie in a line with the path axis which leads into the middle. There is a sort of center and middle, they have passed away of each other. Only in the Roman labyrinth they coincide.
Or differently expressed:
A labyrinth is not symmetrical, although it looks steady.
A labyrinth is no spiral, although the ways writhe.
A (classical) labyrinth is not a figure of a circle, although it is built of arcs.

Here you will get the drawing for a classical labyrinth as a PDF file (in German) to look at / to print / to download / to copy.

To walk a labyrinth with groups a bigger middle is often wished.
The first time in history such a labyrinth could be seen on a graffito which was found on a stone block on the peninsula Knidos in today’s Turkey in excavations of old Roman structures and can be dated to the Byzantine epoch.

The center for the middle jumps quasi out of the square (virtually an ovulation).
The geometrical conversion is more difficulty now. If one maintains the four centers arranged inside the square, the different axes move in different distances and one gets some bigger and smaller segments (like cake pieces) from the previous semicircles and quarter circles. All in all the labyrinth shape becomes more round.

Here you will get the drawing for a Knidos labyrinth as a PDF file (in German) to look at / to print / to download / to copy.

If one liked to have the axis of the last path piece and the center of the middle on the same line, both right centers inside the square move a little bit upwards and to the left. The square changes to a rhomb and the cake pieces will change as well. 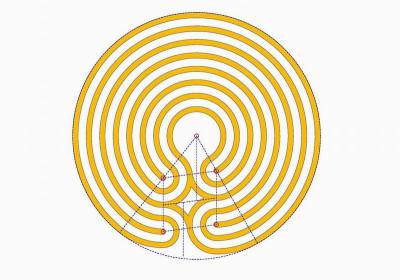 Here you will get the drawing for a coaxial Knidos labyrinth as a PDF file (in German) to look at / to print / to download / to copy.

Should all axes lie on a line now (as for example does the Santa Rosa Labyrinth), the 4 centers inside the square move even more. Consequently the cake pieces and the fontanelle. The original 4 centers have totally contorted and lie crooked within the labyrinth figure. 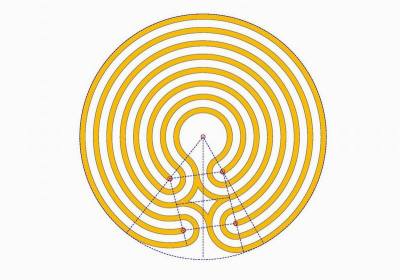 This depends of course also at which place the labrinth is situated and which purposes it serves, what should be stated with it and what would be personally important.
Other variations are still possible, one receives the easiest ones by mirroring the figure in a vertical axis.
One could look at the stages of development of the classical labyrinth to the centered Knidos labyrinth as a change of the square and rectangle to the circle. Then the output stage could be the Chartres labyrinth where the circle and the middle is even more accentuated and where the cross form is expressed in the whole labyrinth.