Hermann Kern is writing in his book Through the Labyrinth (Prestel Verlag, Munich) on page 23 about the principles of form:

Every labyrinth consists of lines that may be construed as a sort of ground plan; they form a sophisticated pattern of movement that requires considerable powers of the imagination to grasp. By trying to envisage walking the path between the lines, one can begin to comprehend this pattern.

Quoting this, I don’t want to deter someone, but make clearly that the employment with the labyrinth can be absolutely demanding. And I would like to assist for a better understanding.

From all one can “generate” a labyrinth, more exactly said: the way in a labyrinth. Since the meander is Ariadne’s thread (just the way) in linear form.
On looking more carefully one recognises some small differences. They are formed by mirroring the “basic form” either in horizontal or vertical axis. One can distinguish four different variations. In the following drawing this can be understood with the help of the colours and figures:

I can “read” the meander from left to right or from right to left. Accordingly to that is the situation of the entrance.

How do I make a labyrinth out of the meander? Or said a little more sophisticated: What code is hidden in the meander that leads me to the labyrinth?

I try to make the “deciphering” as easily comprehensible as possible. Therefore the colours and the figures shall serve as help. So one can pursue the way of the single segments.

First I turn the meander with the access below left from the above drawing about 90 degrees to the left.
The “secret” in the meander is the arrangement of the lines. They are numbered from “0” to “8”. “0” stands for outside, beginning of the line, init. “8” stands for inside, end of the line, middle, center, goal, target, aim. These line segments are also marked with different colours.
Now I read the order in which these segments will be passed through. And, true readers of this blog know it, this will give me the path sequence (line sequence, circuit sequence, level sequenc) for the labyrinth. It is: 0-3-2-1-4-7-6-5-8.
I can also derive the changes of direction from it. So whether it goes to the left or to the right, outwardly or inwards.

I pull apart this rotated meander crosswise. The labyrinth will be presented as a diagram. Of course the lengths of the single line segments are distorted, do not correspond to the original ones or the new lengths. But it does not depend on it at all. It is only important in which direction a line is running. For it is a pattern. Maybe it is difficultly to understand, above all the situation of the entrance and the center. In the real labyrinth they are situated near together and not as in the pattern on the right or left side outside.

I imagine this rectangle always as a pulled apart ring or tyre. If I cut the back side of this ring in the middle and lay both outer ends side by side, the entrance will be situated on the left side and the center on the right one.
Maybe one can recognize that better in the lower drawing? If I pursue the numbered lines (3-2-1-4-7-6-5-8) I alternately have to leave one side and enter on the other side again. The best bet is to try out. 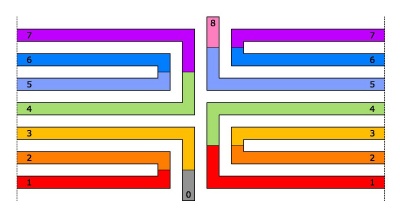 Which meander generates now this left-hand labyrinth? From the above shown four versions the one with the access below left and the other with the access above right. Why? Because the circuit 3 (yellow) turns to the left after passing through 0 (grey).

However, in the meander versions with the access below right and the access above left circuit 3 turns to the right first. Consequently the labyrinth generated from them must also look different, namely as follows: 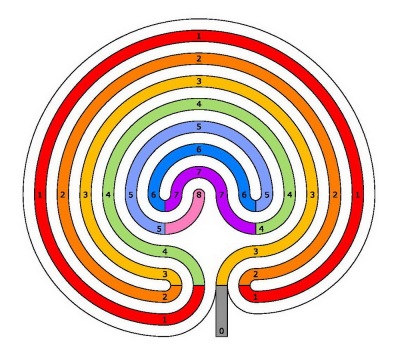 However, this is nothing else than the vertically mirrored left-hand labyrinth.
Two versions of the classical 7 circuit labyrinth can be derived from the four possible versions of a meander, suitable for a labyrinth.

However, in the end the labyrinth should be also shown in such a way as it many know: With the representation of the boundary lines (the walls). They are held in black. The way, Ariadne’s thread coloured in the drawings before, is the free space between the lines. The boundary lines cross and have a beginning, here even four. This form can be easier generated from the seed pattern.

If one makes the ways in all circuits of the same width, the usually central cross will change to the the diamond-shaped “fontanel”.

In former posts (see below) Andreas and I had presented new and up to know unknown 7 circuit labyrinths. We described them from the theoretical point of view. Therefore the practical part shall be of interest in this post.

I had made some “exercises” in wintertime. On snow it is best to construct directly the path of a labyrinth, Ariadne’s thread.

If one wants to experience these labyrinths in sand on the beach for example, it is better to draw the limitation lines.

The circular shape is very good suited for this. I present the labyrinths in some drawings and instructions.
I would be glad if I could inspire as many as possible labyrinth enthusiasts to try out the look and feeling of these labyrinths.

In the drawings the contained seed pattern is set down in colour. In the circular labyrinth with the path sequence 3-2-1-4-7-6-5-8 (the classical or Cretan type) one can recognise that the right half of the pattern is shifted upwards one path width. 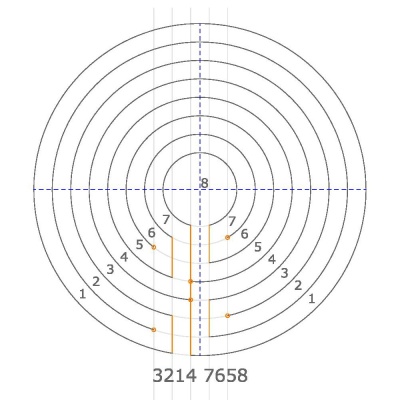 The seed pattern is simplified a little bit. The horizontal bars of the central cross and the angles are circular, so that one needs only the vertical lines of the pattern. To complete the labyrinth one can connect, as usual, from the left to the right (or vice versa) all free points and free line ends with each other.

In sand one scratches meaningfully all eight circles entirely on the ground and constructs afterwards the vertical lines. Besides, one should pay attention to the situation of the main axis. The superfluous parts of the circles can be easily “rubed out”. The real boundary lines can be intensified.

In the design drawings the way is 50 cm wide, the middle has 2 m of diameter (= the fourfold of the path width). Thereby one gets a whole diameter of 9 m. Then the line length amounts to about 138 m and the way into the center will be about 120 m.
The whole can be scaled. That means: Should the labyrinth become twice as big, e.g., the diameter should have 18 m, one multiplies all values by two. Then the path would be 1 m wide and one would have to cover 240 m to reach the center.

The different labyrinth types can best made out by the path sequence. This is the order in which the single circuits are worked through.

Here as an arrangement all eight types (Click to enlarge, print or save): 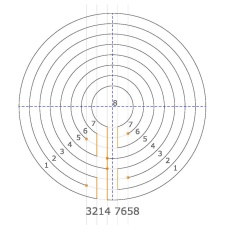 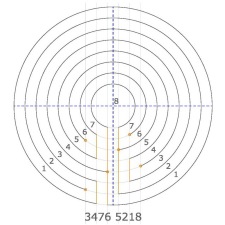 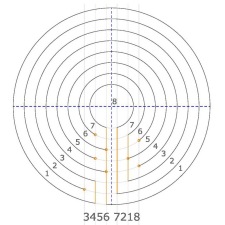 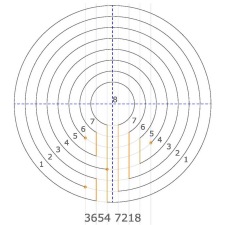 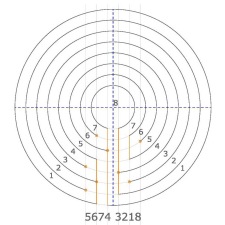 The last example, the type 5674 1238, is the only self-dual one beside the classical (Cretan) labyrinth (type 3214 7658). This shows its high quality.
Hence, it would be worth to be built as a walkable, permament labyrinth. Worldwide there is not yet one, as far as I know. Who starts?

For all diligent labyrinth builders: Here are design drawings as PDF files of all types to see, print or copy: