Alana Forest from Australia has developed new and creative ideas for the labyrinth.

The ways are crossing and looks like being knotted. At first sight this seems to be a maze, because there are crossroads. However, they are not intended as those. Rather one should always go straight ahead, not branch off  to the right or to the left. One can figure the labyrinth three-dimensional, like the lanes in a motorway interchange. 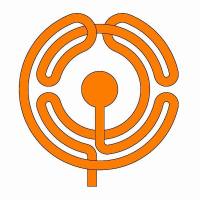 The labyrinth sometimes changes something. Here one can see it.

A Chinese proverb says: A way is made by walking. This is applicable here literally.

Dr. Lauren Artress, a psychotherapist and ordained minister from Grace Cathedral in San Francisco, spent most of March 2008 in Australia running seminars and workshops. 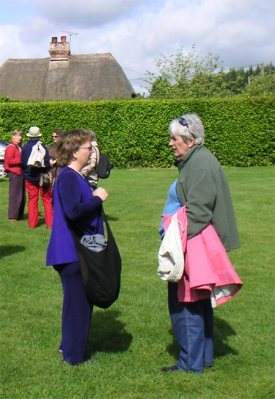 Lisa and Lauren 2005 in England

She has rediscovered the Chartres labyrinth in France as a spiritual tool and made it known in the USA, and worldwide.

In the Australian newspaper The Age on April 1st, 2008, Barney Zwartz posted in his blog The Religious Write under the title Going in circles for good the question for what that should be good.

An old question for each labyrinth fan. In the answers one speeks of the reassuring quality, an other from the deep experience, of the meditativ effects, of the right and the left brain half and so on.
Now, everyone have to decide for himself.

As the labyrinth is an archaic symbol and its origin and its use lie in the dark, it can be used for much purposes, and probably also be abused.
That makes it very exciting and universal in addition.

A simple method, in order to learn something about the labyrinth, is to observe how children are acting. Without explaining something, place them to a labyrinth and they starts running. Into the center and back again, possibly also straight over all delimitations. And starting over.

For what is it good going in circles?
We leave the question behind us and we start to walk.
Solvitur ambulando. It is solved by walking.

Who wants to read what the Aussies are saying, here you will find the above mentioned blog … Link>

Who wants to learn more about Dr. Lauren Artress and Veriditas, here on this website you ca do that … Link>