or, freely adapted from a song by Herbert Grönemeyer (German musician):

My researches on Wikipedia about the labyrinth have inspired me once again to try an own definition of the labyrinth. This is my proposal:

This is probably too long, sounds to complex and looks, hence, quite labyrinthine. Maybe the first sentence would be enough, because it does not exclude the maze and admits the exceptions.

A labyrinth is not always unbranched and totally without every option. Otherwise, the type Baltic wheel (such as the Rad in der Eilenriede at Hannover) would not be a labyrinth. The aim also is not always the middle, especially the geometrical middle or the centre. The Wunderkreis of Kaufbeuren with branching paths is without a real middle and is rather a passageway labyrinth, hence, very well suitable for pageants.

Also the change of course in the movement belongs not necessarily to the labyrinth, because, otherwise, a 3 circuit labyrinth or some modern forms would not be a labyrinth. One can even accept crossroads, like in the Crossing labyrinth of Alana Forest from Australia, because the alignment is unequivocal. One may neither turn left nor right, but always go straight ahead.

Labyrinths and mazes have a lot in common and are related. In colloquial English, labyrinth is generally synonymous with maze. A maze is also a labyrinth (in the broader sense), but a labyrinth (strictly spoken) is not a maze. Since one cannot get lost in it. But it can be bewildering and irritating (at first sight).
I believe, the confusion also comes along that we speak of the labyrinth in the strict sense from a single path free of crossroads and branches and then we show the boundary lines of the labyrinth. Besides, the information refers to the path, Ariadne’s thread, which lies between the boundary lines and is not visible in this form of expression. Just this happened to me at the beginning of my acquaintance with the labyrinth. Only the second and more exact look makes clear the right correlations.

It is the fascination of the labyrinth that it is an ancient, archaic human symbol to be found in different cultures, religions and time epochs and that is open for many interpretations and approaches. This is why it is also qualified for our current time and world as a universal symbol. However, nobody should claim for himself the interpretational sovereignty.

Alana Forest from Australia has developed new and creative ideas for the labyrinth.

The ways are crossing and looks like being knotted. At first sight this seems to be a maze, because there are crossroads. However, they are not intended as those. Rather one should always go straight ahead, not branch off  to the right or to the left. One can figure the labyrinth three-dimensional, like the lanes in a motorway interchange. 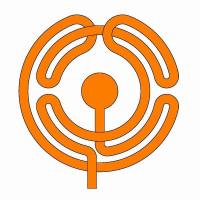 The labyrinth sometimes changes something. Here one can see it.

A Chinese proverb says: A way is made by walking. This is applicable here literally.