Every enthousiast of labyrinths knows that there is a relationship between a labyrinth and a meander.
Already the old Greeks and Romans and nowadays the experts of labyrinths knew and know that the original labyrinth (now called Classical, sometimes Cretan labyrinth) consists of two meanders added to each other.
It is also well known how to turn a meander (by rotating it) into a labyrinth.
Consequently it should be possible to develop a meander from a labyrinth.
Here it will be shown in an understandable way how an experimental labyrinthologist accomplishes this.

Two years ago we visited a classical labyrinth in Schwäbisch Hall (Germany), opposite the Comburg. Somewhat downhill there is an old Romanic church. The altar area had been painted in a historicizing way during th 19th century, and there I noticed a three-dimensional meander. 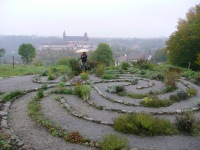 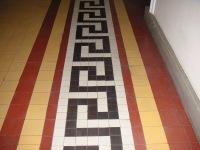 When I was in the University Hospital in 2008 because of my heart condition, the meander crossed my way on the flooer of the staircase in building D 20 as well, or rather – I crossed its way.
And just a few months ago, when visiting the new classical labyrinth at the Türnich castle grounds in Kerpen (Germany), we saw this wonderful meander border in the Hofcafé and Hofladen (castle yard café and shop).

Only three days ago I found this beautiful Greek fret on a house in Würzburg (Germany), my home town. Within sight to the classical labyrinth in the garden of  house Saint Benedikt that Beatrice laid out there about 1990.

How does it work?

It would be best if all readers of this blog followed the explanation on a sheet of paper (preferably chequered). That way one understands it best in order to inwardly intensify it. That is how I actually did it as well.

The 7-circuit labyrinth (here square) can be developped from the well-known seed pattern. The limiting border lines (the walls) and Ariadne’s thread (the path, the way) are equally wide. The path is black, and the walls are white or left out altogether.

Ariadne's thread (in black) inside the labyrinth

From the labyrinth I develop a diagram in rectangular shape. I have described earlier (here the link to the post) how this works and is to be understood.
One could call the digram also operational plan, schedule, formula, direction for use, legend, painting according to numbers, structural plan, guide, explanation of signs etc. Maybe such a description would be helpful for a better understanding?

The diagram is a design of the labyrinth in a rectuangular, schematic form. The paths are distorted and do not correspond to the actual lengths. Most important, however, – one can see the essential, the structure of the path, the path sequence, the changes of direction, the paths axes.
The ways are numbered from the outside to the inside. The order in which the paths are taken is the meanwhile well-known path sequence: A-3-2-1-4-7-6-5-Z. This should help us when converting. According to the numbers one can oriente oneself and follow the twisting path. All those who have already stepped a labyrinth into the snow or know how to draw Ariadne’s thread in one stroke by heart have intensified this inwardly.

Now I squeeze the way structure on the sides to the smallest possible width. It is even more distorted now, but still correct. I practically created two single and identical meanders from one labyrinth, the lanes 1-2-3 and 5-6-7, connected via 4. The I start the way out of the labyrinth at the top. It corresponds to the into it, just in a mirrored fashion. The result is four meanders following each other: The Greek key or fret.

Now I will turn this design by 90 degrees to the right and thus obtain the rotated transverse meander.From the figures I can read the path sequence. Doing so, i notice that in front of me there are four identical elements. Each single element is a meander, and from those the labyrinth, or more exactly: Ariadne’s thread is constructed. The way into a labyrinth and out again therefore corresponds to a way through four meanders. Thus I recognize the relationship between a meander and a labyrinth. The meander is the depictive representation of Ariadne’s thread.

When comparing the diagram with the photos of the meanders above I see that the lines correspond.  The meander can also run from the right to the left, then it is flipped vertically. Or it can be flipped horizontally. However, the path sequence remains identical. Nothing else matters.
Only the meander of the University Hospital does not fit the pattern. This means that not every meander pattern is suited to create a labyrinth. 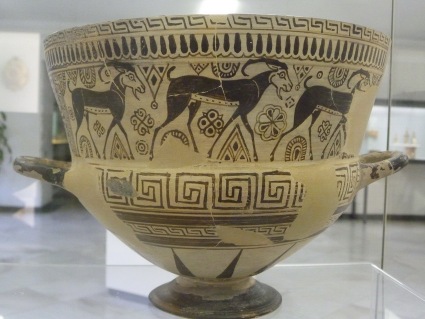 Chalice from Chios 600 BC

This chalice from Chios (No. L 128) from the time about 600 BC I found in the Antikensammlung (antique collection) of the Richard von Wagner Museum of the University of Würzburg. On it a nice meander is to be seen.

Here an open offer for a homework:

What type of labyrinth is hidden there in? How many circuits does it have?

Leave a Reply to From Meander to Labyrinth | blogmymaze Cancel reply