While I tried to build a geometrically exact labyrinth from the different patterns, it has struck me that both seed patterns are not so different at all. And thus I would like to show both together.

Here first the square which four sides are divided into eight constant parts. In a drawing one can take squared paper and make every side 4 cm long. In  reality this would be four metres and the drawing would be on a scale of 1:100.

The mark and name of the different points already states something about the later use within the construction. “A” is the starting point; “Z” the goal or the centre, at the same time, however, also a centre of different arcs. Hence, marked with a bigger symbol of a circle. As well as the four corner points M1 to M4, also centres of arcs. And at same time delimiters for the walls.
The path axes (Ariadne’s thread) are marked with a small cross and are numbered from 1 to 7. In between are the walls which are marked with small circles. 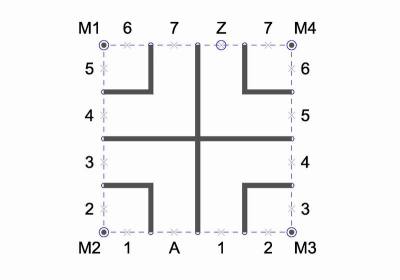 The angular seed pattern for the walls

Here the well-known seed pattern with the isosceles cross, the four angles and the four dots.

The round seed pattern for the walls

However, the lines must not be angular, they can also be rounded and then the pattern looks like above.

The seed pattern for Ariadne's thread

The seed pattern for Ariadne’s thread looks in the limiting square like on top. 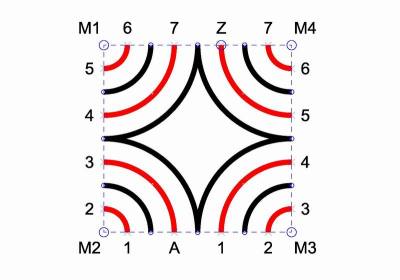 The two seed patterns in the square

If both patterns are shown together, one recognises the relationship and resemblance between them. And also that the centres of the different arcs are same. No surprise, because the lines are parallel and the red thread is, finally, the middle between the black boundary lines, so to speak the path axis.

Afterwards I would like to point out which arcs are constructed from a total of five centres. There are quarter circles and semicircles which run in each case in different sectors. The order is as you like, since basically it makes no difference which curve is drawn or constructed first. This arises by itself, if one applies the principle for the drawing of a labyrinth properly. As it was described in the older posts on this blog.

Tip: The following, as well as all remaining drawings, can be clicked to enlarge. Then a new window is opened. 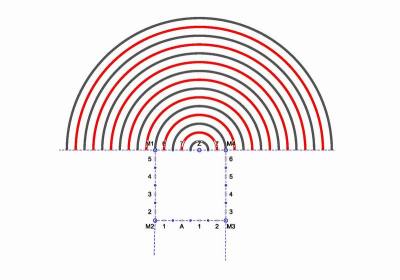 The centre Z on top

Here the finished labyrinth with the walls in black and Ariadne’s thread in red. It is a classical seven circuit, left handed labyrinth.

If you would like to build such a labyrinth, you will find all specifications and all radii in this design drawing on a scale of 1:100. It is a sort of prototype for a dimension between axes of  1 m and scalable.

Here you may see, print or copy the design drawing as a PDF file.

2 thoughts on “The Two Seed Patterns of the Labyrinth”