Describe your life in six words

one could describe in six words, what that should be.
Since some weeks six-word memoirs are spread in the blogosphere.
The starting point was probably an article in the SMITH Magazine (Slogan: Everyone has a story) about a book with six-word memoirs of prominent people from the USA, connected with the appeal to write its own story in six words.

Now it spreads with a kind of chain letter in the Internet world. Normally I have something against chain letters, but here I do not want to be so strict. It is a play, to which none is forced. One cannot win anything and no one is “punished”, if one does not want to join in.

Here are the guidelines, should you choose to participate in this yourself:

At 70: Prefer blogging to jogging 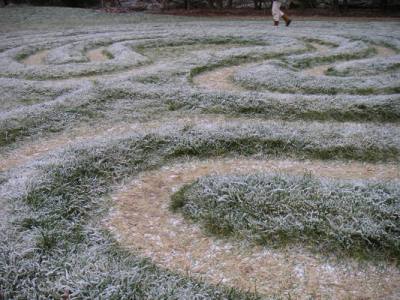 So far so good

My own six-word memoir history was initiated by Kimberly Saward’s blog; she in turn was invited by Peaceful Knitting.

For continuing I would like to encourage the bloggers I know:
There is my daughter Noëmi; some companions on the labyrinthine path, such as der Stein-Flüsterer; Ilse from Austria; Els from the Netherlands; the author of the Labyrinth-Blog on Scilogs.